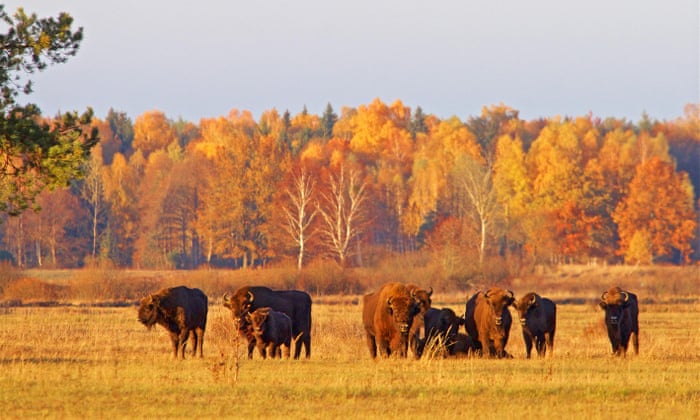 It is one of Europe’s last remaining primeval forests, a last vestige of those that once covered the entire European plain from the Bay of Biscay in the west to the Russian Ural Mountains in the east. It is home to 800 European bison, is an EU Natura 2000 Special Area of Conservation and this forest is a UNESCO designated world heritage site.

You and I might believe this little miracle of survival would stand forever protected from loggers. But we’d be wrong.

Under the guise of harmless beetle the Polish government has authorised the logging of 180,000 cubic metres. National forest director Konrad Tomaszewski outlined the plan to harvest wood in order to halt forest degradation by combating a spruce bark beetle infestation, to protect tourists and rangers from the risk of trees falling on trails.

So why are half the trees cut down to date non-spruce and therefore not affected by this beetle? And why are they worried about a perfectly normal forestry infestation? It is an excuse to rob us of our forestry heritage for profit.

Greenpeace Poland activist Katarzyna Jagiełło said.“The minister does not understand that this insect is a frequent and natural visitor, that it has always existed and the forest has managed to survive,”

A delegation from Unesco visited Białowieża between in June to assess the situation. Luc Bas, the director of the International Union for the Conservation of Nature (IUCN) which advises the Unesco world heritage committee said that the organisation was receiving “a lot of worrying information” about logging activity in Białowieża.

“The IUCN is planning a mission to Białowieża … to assess the situation and the effect of the new logging plans on the World Heritage site. We would advise that, as a precautionary approach, logging should not be proceeding in the Białowieża forest until there has been an assessment of its implications for its world heritage status,” he said.

The initial IUCN opinion said: “Plans by the Polish government to undertake logging in Bialowieza Forest could disturb the natural ecological processes that are part of the World Heritage values of the site and, if implemented, could provide the basis for listing the site as ‘in danger’ in 2017”.

The IUCN’s Tim Badman told EUobserver: “The World Heritage Convention was established to give the highest level of protection to sites with outstanding universal value, which in the case of Bialowieza includes undisturbed natural processes and the richness of dead wood.”